My December highlights are child’s play to choose… in that all of them are plays for young people. 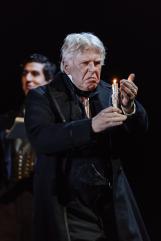 The first is the RSC’s new Christmas Carol adapted by David Edgar. You might think Dickens for Christmas is a bit chocolate box but not in this version. Not at all. It’s an angry social commentary, urgent and relevant to now. Time and again I was struck by different brilliantly resonant lines, at one point Marley says to Scrooge (in a wonderful performance by Phil Davis):

“We are all dead if we can’t see ourselves in the hundreds, the thousands” – this gave me tingles. Hopefully a few politicians will see this one… It continues until 4 February so do get to Stratford Upon Avon if you can (Tory MP or not).

Next was a magical panto – Rapunzel at Theatre Royal Stratford East. I took mini-me and she and I both adored it, she for Baby Bear and the songs, me for the brilliant performances and cheeky winks to adult culture (the witch makes her potions in a Winnebago with walls covered in post-its in a nod to Breaking Bad). I can safely say a new tradition has been born and I’ll be taking my daughter to TRSE for panto every year from now on.

Finally I travelled to the Lyceum for a taste of Arabian Nights. Suhayla El-Bushra’s clever adaptation makes the naughty stories work for a young audience without straying too far from the spirit of the original work which winds stories into stories in a magical kaleidoscope. Once again there’s great songs, lovely performances, plus here the addition of talking goats to make a classic Christmas show. It was super.