How is it October already? That means two months ’til, but enough of that: instead my September highlights, which include a radio, a telly and an event.

First Tracks – a nine-part radio drama that finished this week. Written by Matthew Broughton and directed by James Robinson the series lived up to its billing as “a major conspiracy thriller”. It had more twists and turns than your cerebrum (that’s me trying to make a clever reference for those in the know who have also listened) and some fantastic performances especially Romola Garai’s Helen. We are also treated to cameos from the brilliant Nabil Elouhabi as a drunk doctor and the wonderful Kenneth Cranham pops up in the last episode too.

I absolutely loved the visual quality of the production despite it being a radio play – there was no shying away from big, exciting moments – car chases – stuff like that. Exhilarating, ambitious, must-listen stuff, so – you know – listen it on iPlayer.

Next Doctor Who – well #WritingDoctorWho a brilliant event I was lucky enough to get to at the BBC Radio Theatre where lead writer and exec Steven Moffat talked about writing for the programme and in general. I wrote a detailed blog about the #WritingDoctorWho event for About the BBC so I won’t cover the same ground, but there was one general comment Moffat made about giving script notes that is very simple, but is joyous and made me think about script editing in a whole new (positive) way. He said:

“You will make more improvements by praising the good than by criticising the bad. Praise is not sugaring the pill. It is more important to grow the good than shrink the bad. There are many ways to miss a target – but only one way to hit it. Find the great about a script and get more of that.” 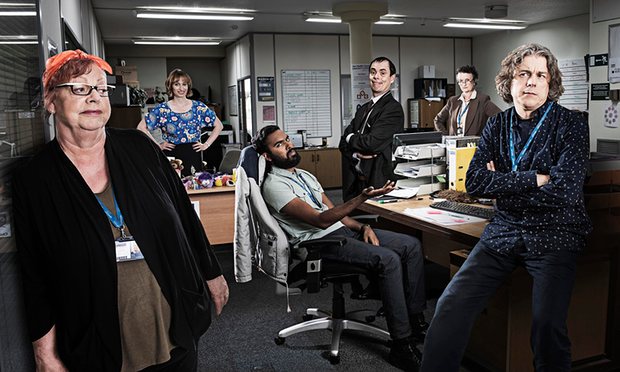 Finally I’m really enjoying Damned a new Channel 4 comedy set in a social workers office written by and starring Jo Brand and Morwenna Banks, that also has Alan Davies in it. Only two eps in there’s already been the topics of parents with learning difficulties; a granny looking after the kids because Mum is addicted to heroin and a suspected pupil teacher relationship and yes you did read right – it is a comedy. All this is handled really smartly and the writing constantly undermines your expectations. It’s very ,very good, check it out.

October brings… an event in Lichfield that I’m speaking at with Hassan Abdulrazzak and films in the London Film Festival.