March has passed in a flurry of pre production and rehearsals for my play Scenes from 68* Years which, if you have been anywhere near me in life or on social media you will know runs from 6-30 April at the Arcola in Dalston.

Those rehearsals – though I haven’t been in a great number – have been a massive cultural highlight of my month and my year. The cast and crew are astonishingly talented and dedicated to breathing life into the play I wrote – it’s actually pretty humbling. It’s also massively gratifying to pop into a room where a group of people are saying words you wrote on a page, and basically making real something that has only danced in your imagination. Every single person in the room (and our actress in Palestine Maisa who skypes in o rehearsal and will Skype into performances) believes in this production and I think it’s going to be really special, please do book and come along if you can. 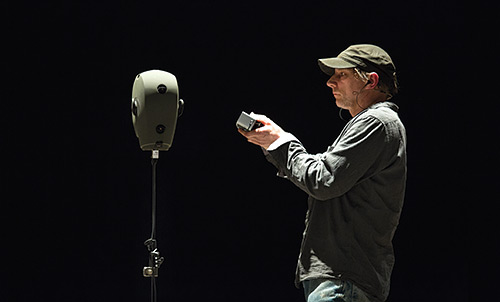 Another immense theatrical experience makes my top three this month – The Encounter by Complicite. I was terrified it couldn’t live up to the hype but it surely did … A revolutionary reimagining of staging a play that is a sort of radio play hybrid listened through headphones. The audiences watches not only a tour de force performance from McBurney but also how the piece is made, as he creates the ‘foley’ sound effects before our eyes. I’ve never seen anything quite like it before. I’m hoping they’ll stream it online again in future as I’d like to experience it that way too to see how/if it affects my reaction.

Finally a telly – Line of Duty is back. And already it’s a roller coaster. Season 3 of Jed Mercurio’s drama about a special branch of the police who investigate corruption and crimes inside the force ,immediately has the strengths of the previous series: believable but unpredictable characters and a plot that has you gasping with every twist. I once heard Mercurio discuss how he writes and he said he never plans the ending of the series, so when he starts writing episode 2 or 3 the plot can sometimes go to places even he didn’t expect, and he has to go back and alter previous episode’s scripts to ensure they work in light of what is going to happen. To my mind it’s this writing style that leads to such edge-of-the-seat plotting – and he’s not afraid to kill of a character out of the blue. Essential Thursday night viewing – unless of course you’re coming to my play the Arcola in which case you can watch it later on iPlayer. *smiley face*

Bear with me oh my single reader… from next month it’ll be over and I won’t keep boring you with plugs!