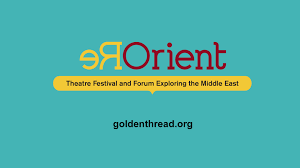 There is no question of my cultural highlight for October: I got to spend 5 days in San Francisco at the start of the month thanks to the Doris Duke Foundation and Golden Thread Theatre’s Reorient Festival. The festival is a celebration of short plays from/ about the Middle East and it included my offering Bitterenders. You can see the full programme here but highlights for me were Hassan Abdulrazzaks Last Kingdom and Mona Mansour’s beautiful, gossamer and sad play The House. And as if that wasn’t enough the last weekend of the 6 week run includes the Reorient forum which features a host of talks and discussions including – this year – a panel titled: Theatre Between Home and Exile: New Palestinian Voices which I was privileged to be speaking on along with such luminaries as Co-Chairs: Dr. Mas’ud Hamdan (Professor, University of Haifa, and Playwright and Scholar, Haifa) and Professor Rebekah Maggor (Affiliate at the Warren Center, Harvard University, and Translator and Scholar, Boston), and Panelists:  Ismail Khalidi, Dalia Taha and becuase of stupid visa restrictions Yasser Abu Shaqra and Rama Haydar via Skype.

I had a brilliant time meeting all these artists as well as Torange Yeghiazarian, Evren Odcikin and many many other inspiring people. It was heaven.

Then I came back to Blighty and watched lots of Telly but there’s heaps of good stuff on and a double whammy of brilliant Nicola Walker in BBC Ones River and ITVs Unforgotten.

I even saw some films – Suffragette had me in bits. Great performances and I can’t believe it’s taken so long for this story to be told on screen. And Selma – phew – amazing, another one it’s taken too long to be told in the main stream and begs the question, how far have we actually come?

I was also charmed by First Love is the Revolution at Soho, and impressed and harrowed by Cuttin It on Radio 4. It transfers to a theatre near you next year and I’ll certainly be along to see how it’s adapted for stage.

November promises lots more good telly, I want to see if I can get to Brooklyn at the cinema but might try and read the book first, and a gig at the Barbican for Lebanese band Mashrou Leila whose music I adore so can’t wait to see how they are live.